Chandler accepted the honor at AGS’ Circle of Distinction Dinner

New York, NY – Diamond Council of America (DCA) -- a nationally accredited school that offers jewelers the opportunity to earn professional certifications in diamonds, colored gemstones, and fine jewelry sales through distance education – announced that its President and CEO, Terry Chandler, was honored with the Triple Zero® Award at the American Gem Society’s annual Circle of Distinction Dinner on Tuesday, July 17, 2018, at the historic Plaza Hotel in New York City. 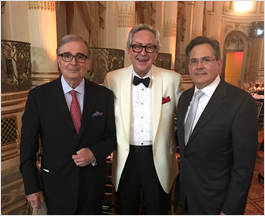 “The term, ‘Triple Zero,’ signifies the highest grade a diamond can receive in the American Gem Society grading system. The American Gem Society established the award to recognize jewelry professionals for their valuable contributions to our industry,” says Katherine Bodoh, CEO of the AGS and AGS Laboratories. “Terry’s dedication to the jewelry industry shows through his work and the contributions he’s made throughout his career. We are pleased to recognize him with this prestigious award.”

During the dinner, Chandler and David A. Bouffard, Vice President, Corporate Affairs, Signet Jewelers Ltd., were both honored with the Triple Zero® Award, while Stephen Lussier, Chief Executive Officer, Forevermark received the Lifetime Achievement Award. “I am honored and humbled to receive this special award from the American Gem Society and to join the ranks of the previous honorees, as well as tonight’s honoree,” says DCA President & CEO, Terry Chandler. “DCA has been a member and supported AGS for nearly two decades because they stand in the doorway to protect and promote the integrity and ethics of our industry."

Terry Chandler accepted the role of President and CEO of the DCA in February, 2001. During his tenure, the DCA has grown from 70 members representing approximately 1,200 stores, to one of the industry’s leading education and training resources with nearly 300 members representing over 4,000 retail jewelry stores in the United States, Canada, Great Britain, and Australia.

Chandler and the DCA team created the Jewelry Career Initiative in 2014, a program that teaches DCA’s Diamond and Colored Gemstone courses in high schools and to veterans’ organizations.